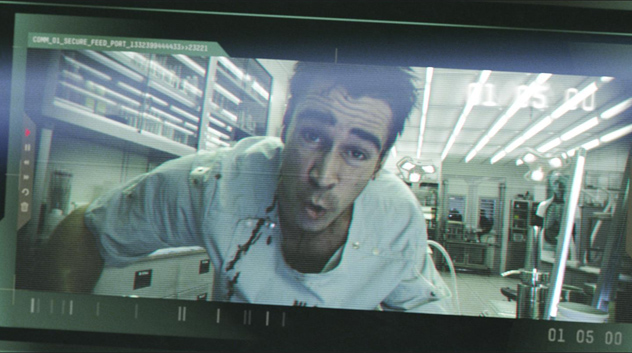 Douglas Quaid is a factory worker with a stable job and a loving wife, but upon learning that a company named Rekall could grant him the memory of the ultimate espionage adventure, he decides that a virtual vacation is better than no vacation at all. But in the midst of having the new memories implanted, something goes haywire...

The Senate delivered 300+ shots, which included three main sequences. In Reed’s apartment, The Senate were given the task of creating the look of a 3D hologram head. Using green screen plates of Colin Farrell, individually tracked and then applied to 3D geometry. We then added video scan lines that followed the contours of the face to give a sense of dimension.

The New Asia Street sequence required The Senate to work on green screen comps and to add multiple hologram signs throughout the streets. We also used supplied graphics to create a stylish video display for the telecoms device that has been planted under the skin of Quaid’s hand, which activates when held against a pane of glass.

The Senate also provided comps for the final fight sequence. Matching work from other facilities, we used supplied 3D renders for set extensions and to comp the internal mechanics into the Synth robots.